The 48 Laws of Power by Robert Greene: An Overview

In a previous post, "Lessons Learned from Little Red Riding Hood and Maslow's Hierarchy of Needs", we discussed Little Red Riding Hood, a fairy tale about a cunning wolf and a naïve young girl.  Unfortunately, this story is not just a children's cautionary tale.  It is not uncommon for adults to be conned, manipulated or lied to for various reasons. After experiencing a perplexing social interaction, a relative suggested I read The 48 Laws of Power by Robert Greene. The book can make you laugh, cry and seriously be concerned about the state of humanity. However, it is worth a read.  In the Acknowledgements section of the book, Robert Greene says,

"Finally, to those people in my life who have so skillfully used the game of power to manipulate, torture, and cause me pain over the years, I bear you no grudges and I thank you for supplying me with inspiration for The 48 Laws of Power."

On our life's journey, we are bound to interact with the Trickster archetype.

Tricksters mock authority, play games and pretend to befriend for selfish gain. They are deceitful. Tricksters are the villains who make interesting characters in stories, but wreck havoc in our personal lives. Tricksters are usually con-artists.

According to Merriam-Webster, a con is 'a trick or ruse used deceptively to gain another's confidence.' A con is short for confidence. The con-artist is a person who specializes in confidence and deceit. The collateral damage done to victims of cons is overwhelming. Usually, the victims are the very young, vulnerable women or elderly.

These stories are a few examples of con games:


·          Anna Sorokin-convinced friends she was a rich heiress.  Believing her story to be true, these friends paid for Anna's lavish lifestyle, vacations and fancy clothes.  A movie is being made about her life.

The 48 Laws of Power by Robert Greene

Greene's book expounds on 48 Laws to master to gain power. Power is defined by Merriam-Webster as 'possession of control, authority or influence over others.' One of the critiques of The 48 Laws of Power is that it is a 'how-to' book on how to take advantage of other people.  However, I see The 48 Laws of Power as a book of wisdom. Even if you do not agree with all of the laws, the knowledge can help you recognize certain behaviors in others which you can use to protect yourself from harm.

Robert Greene answers critics by stating that The 48 Laws of Power is about reality. These behaviors exist in the real world. Reading a book about manipulation and Machiavellianism does not feel good, but it is better to be knowledgeable than to be a victim.  The book is satire, in some ways, because it exposes some of the extreme shadow tendencies of human behavior.  The book describes the villains we see in movies, as well as everyday people who use their wits to score points in the game of life. 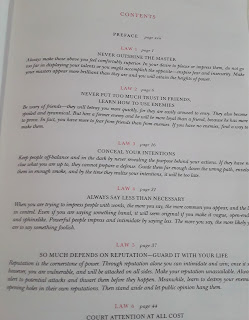 My copy of The 48 Laws of Power

Here are a few of my favorite laws from The 48 Laws of Power and personal insights:

Law 1-Never Outshine the Master-  Avoid correcting your manager, supervisor or director in public. It is best to discuss mistakes in private. If you think looking and sounding extremely smart in front of people makes you look good, then think again. People who rise to the top are modest with their intelligence. Actually, they sometimes downplay what they know until it is necessary. There is a time and a place for everything. In life and death situations, speak up!  Other times, be tactful.

Law 4-Always Say Less Than Necessary-Too much talking can cause you to say things you will regret later. This is an easy law to break.  You may think being conversational and loquacious is a way to make friends and influence people. Sometimes, it is not.  It just makes you like you are trying really hard to impress people. It is okay to talk, but it is nice to listen as well.

Law 18-Do Not Build Fortresses to Protect Yourself-Isolation is Dangerous-Even though the world can be a scary place, it is best to be social and seek out like minded people who you can enjoy, have dialogue, and establish strong bonds. Being alone and isolated is not healthy. Maya Angelou writes in her poem Alone, "all alone nobody, but nobody can make it out here alone." Life is about relationships. We all need friends, colleagues and confidants.  My post, and Green's book, is designed to share insights on how to protect your interests from those who wish to do you harm. There are people who exploit the human need for socializing for selfish agendas. Be wary of people whose use and abuse. It can be tricky. Knowing the difference between a friend and a foe takes time and wisdom. However, becoming observant is key. People's true colors eventually show. Be careful and enjoy life with people who respect and treat you well.

Here are a few of my Laws of Power:

1. Avoid Gossip-If you cannot say something to a person's face, do not say it at all.  What you say will be repeated. This is a difficult one especially since most of our social interactions involve talking about people.  Sometimes people can keep secrets, but you never really know. Only share with extremely close confidants whom you have known for years and who have proven their trustworthiness. Even then, it can be risky. Early on in my career, I shared my opinions about a co-worker with a friend who I thought I could trust.  We were both talking about work. This friend repeated what I said to the other.  Actually, I was put on a three-way phone-line, unbeknownst to me.  What a mess. I learned from this experience.

2. Three Year Rule-Give yourself three years before calling someone a 'friend'. Actually, it might take longer.  It takes time to really know a person; sometimes years. Often, we are quick to think we know a person and start sharing secrets and intimate details about our lives with someone we barely know. It is best to be safe than sorry.  You can socialize and be kind, but refrain from telling strangers your secrets and trusting people too soon.

3. Never Be Surprised by People- Nothing surprises me anymore about social interactions.  Even though I am an optimist, I do my best to plan for the unexpected. I can control my behavior, but not others.

4. Trust Your Instincts- Trust your instincts. Avoid letting people talk you out of your own common sense.  Gaslighting is a favorite tool for manipulators and con artists.

5. Listen to the Advice of the People Who Truly Love You- I know some people have toxic family members.  However, if you are fortunate to have friends and family who truly love you it is best to listen to their advice.  They are not emotionally involved in the relationship. They can see right through the emotional connections.  Older people have witnessed a lot in their lives.  Benefit from their wisdom.

6. Be Comfortable with Saying No-It is okay to say no and mean it. I have been in situations where people tried to turn my 'No' into a 'Yes'.  The pressure was real and they were relentless. Even as a grown adult, I have seen people try to pressure others into doing things that they do not want to do. If you say no, then mean it. Set your boundaries.  Chances are that the people who are trying to get you to change your mind would not change theirs in the same situation.  And, sometimes, people see making you change your mind as a challenge. If you give in, then you lose power and respect. No is a word that is okay to use. Feel confident when you say no, and do not take it personal when someone says no to you.

7. Be Careful How You Forgive- Learning how to forgive ourselves and others is a part of life and development.  However, be careful how you forgive. Forgiving someone means accepting that the past is what it is, but it does not always mean resuming a relationship with a person.  Not all apologies are created equal.  Some people may really feel remorse, while others say, "I'm sorry" just to get another opportunity to hurt you. We all make mistakes. I keep a journal. I don't recognize the person who I was five years ago.  I have changed so much and matured, and I know I have more to experience. We are all on different levels on our journey, but just because a person is learning how to treat others does not mean they need to practice on you. Just because a person has been hurt in life does not give them a pass to unload that hurt on you. Protect your energy. Accept an apology, but notice whether the behavior changed. Actions speak louder than words.  If a person's behavior does not match their apology, then you may want to reconsider the relationship.

I suggest you write your own Laws of Power. They will change over the years as you mature. Know who you are and what you believe. Believe me, you will meet people who will try to change you to become who they want and need you to be for their own personal reasons.  Never compromise your integrity for another person. 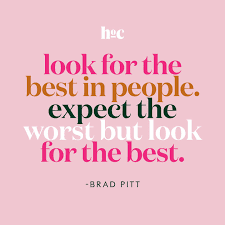 Our community and family influence our values.  Problems with interpersonal communication come from believing we all speak the same emotional language.  For an example, loyalty for one person may mean total devotion and trust. However, to another person, loyalty means devotion sometimes. What is normal behavior to one community is an aversion to another.  Even though we appreciate diversity in our friendships and relationships, it is wise to consider the impact various backgrounds may influence a person's beliefs. When meeting new people, consider a person's culture and background which will be the evidence you seen in their behavior.

Below are some examples of how perception impacts reality:

I am enough: Relationship Patterns: Generous. Giving.  Loves to share. Considerate of people's feelings. No need to trick people to get what they want or need.

Relationships: Based on trust.

I am not enough: Relationship Patterns: Selfish. Stingy. Calculating. Feels a need to trick or manipulate people to get what they want or need.

Relationships: Based on need.

Everything happens for a reason. People will defend their choices and behaviors, both positive and negative even if it hurts someone.  Robert Green's 48 Laws of Power gives us the insight in the minds of those whose perception of the world is I am not enough.

Read The 48 Laws of Power for Yourself

Robert Greene's The 48 Laws of Power reminds me of The Prince by Niccolò Machiavelli-both books are philosophies to explain the strategies some people use to get ahead in life.  According to Robert Greene, the people who are skilled at manipulation do not need his books because these traits are innate to them.  However, I would not be surprised if they keep a copy close by just in case. In reality, books like The 48 Laws of Power are for the people who seek explanations to understand life better and protect themselves against tricksters. Some of the laws will make sense to you; others will not. When I read the book I had a lot of 'aha' moments because it explained some social interactions I had with people who tried to gain power over my space.  In reality, we will meet people with hidden agendas who will do their best to gain the upper hand in a situation. This is an unfortunate reality about the competitive nature of life. People are not always wonderful and kind. It is what it is.

The 48 Laws of Power has been described as the 'psychopath's bible.'  You be the judge.  Knowledge is power.