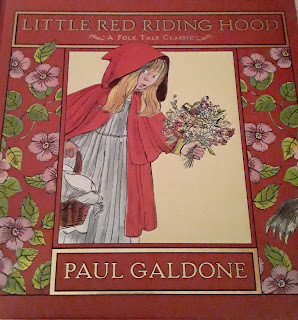 Fairy tales are written for children, and cherished by adults. The stories are like flower seeds which bloom in our unconscious as we mature. As a child, I read Little Red Riding Hood, a famous folktale. I thought the story was cute and entertaining. Recently, I revisited the story and uncovered a cautionary tale about the dangers of naivete. Folktales reveal insight about human nature so we will recognize these behavioral tendencies in ourselves and others.  This knowledge helps us wake up, and educate our wants to desire goodness for ourselves and humanity. Let’s discuss….

Stories are multilayered with various interpretations.  Each person derives a meaning based on their own background. Since we constantly change over time, we never read the same story twice. When I first read Little Red Riding Hood, I never thought deeply about the meaning. As an adult, I see the story’s revelation concerning the shadow nature of the wolf and the trusting innocence of Little Red Riding Hood.

Fairy tales are stories about real life. Maybe you have the innocence of Little Red Riding Hood and experienced the aftermath of meeting a cunning person like the wolf in the story. The competition between predator and prey is not limited to the animal world, the human world has similar characteristics.  For an example, computer viruses and cons happen to people everyday.  You can read stories of innocent people being tricked by ponzi schemes and other deceitful practices. In life, we cannot always prevent things from happening, but we can educate ourselves to ask the right questions and seek evidence which can help us decide who to trust and who to avoid.

What is a meaning of Little Red Riding Hood?

Sometimes, we do not always know what a person’s real intentions are until they are visible. People can be manipulative to satisfy their selfish desires. Strategies such as lying, gaslighting, deceit, isolation, coercion and nagging are used to control the willpower of another person.  The goal is to force the victim to surrender.  Usually, con artists look like nice and charming people. They pride themselves into turning a 'no' into a 'yes.' Be careful! Before trusting anyone, take time to get to know them first. Trust your instincts. A lapse in judgment can jeopardize your safety and harm the people you love…

Con artistry involves getting the confidence of a person before seducing them into giving up something of value. The value could be attention, time, love or favors. The wolf does not immediately reveal his true intentions.  At first, his approach was friendly. Like a baby, Little Red Riding Hood was trusting and innocent.

Why did the wolf take advantage of Little Red Riding Hood? The answer can be found in Maslow’s Hierarchy of Needs.

Maslow’s Hierarchy of Needs categorize human motivation into levels. Lower needs must be satisfied before higher ones are met:


Opposite - Limited social connections and loneliness.


Opposite - Low self-esteem, weakness, feeling invisible, or lack of freedom.

Level 5 - Self-Actualization - Accomplishment Needs - A feeling of achievement and success. 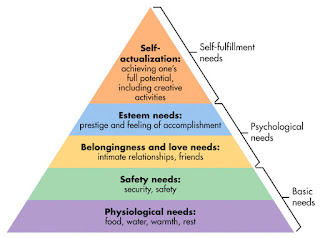 Our human needs are universal, but our methods of satisfying them are influenced by our personality, culture, economics and personality.

The wolf represents level 1- a need for food.  He hunted Little Red-Riding Hood because he wanted her to be a meal.


When will Little Red Riding Hood be promoted to levels 4 and 5, Esteem needs and Self-Actualization?  It depends on which version of the story you read. In some versions, Little Red Riding Hood is eaten by the wolf and dies, but in others she is rescued. In life, we will repeat the same tests until we learn the lesson.  Once we fully understand what we need to know, the lesson is no longer a challenge so we move on.  Just like moving up levels on a video game, once we gain skills, we rise to the next level of difficulty until we master the game. The consequences of each repeated test gets stronger and stronger.  A friend of mine kept getting speeding tickets.  The tickets were telling my friend to slow down. Unfortunately, my friend was in a terrible car accident before the lesson was learned. Life is a learning experience.

Maslow's Hiearchy of Needs is one of many theories about human socialization.  The diagram and definitions is one way to understand human behavior.

The Dangers of Projection:

Projection is defined as “the process of displacing one’s own feelings onto a different person, animal, or object.”  Projection is gluing one’s own feelings and beliefs onto another person. Carl Jung said, “Projections change the world into the replica of one’s own unknown face.”  In projection, we see what we want to see and believe what we want to believe.  Because Little Red Riding Hood believed she was in a peaceful space, she did not recognize the wolf wearing her grandmother’s clothes. 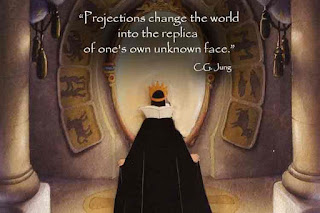 What can we learn?

According to Maslow’s Hierarchy of needs, human beings must fulfill specific needs to feel satisfied with life. The manner in which we pursue those needs differ based on our background, experience and circumstance. For an example, to satisfy the basic needs of water and shelter, a person may decide to get a job or start a business. Another person may choose a life of crime. To satisfy a need for love, one person may seek relationships with like-minded people, but walk away when no connection is made. In contrast, a person may try to scheme, persuade, manipulate, and harass a person into a relationship, and refuse to take no for an answer. A desire for status may cause families to pursue expensive lifestyles and live beyond their means.

Little Red Riding hood was vulnerable and did not recognize the dangerous inclination of the conniving wolf. In our life, we are challenged to distinguish between a friend or a foe. Sometimes we trust people we shouldn’t, and distrust people we should trust. As we grow and become wiser, we learn to trust those who prove that they are trustworthy.

What do you think? Thanks for sharing.