Phases and Stages: A Look At Erik Erikson's Eight Stages of Psychosocial Development - Part One 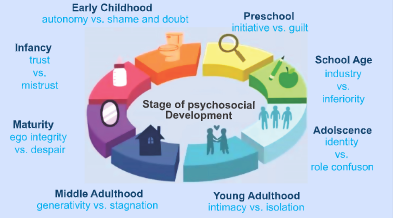 Courtesy of Chegg Stages of Psychosocial Development
Happy Spring! Nature has a recurring cycle of four seasons - winter, spring, summer and fall.  As such, in my community, now is time to plant seeds for a fall harvest, watch flowers bloom, and enjoy summer weather in a few months.  Gardening is a step-by-step process. First you till the soil, then you plant the seeds, water the seeds and hope for the best. Some seeds grow only in specific climates.  Gardening is sowing and reaping; Everything happens in stages. Likewise, human personality development progresses in stages, as well based on some theories.  Recently, I researched Erik Erikson's Eight Stages of Psychosocial Development which broadened my outlook.  Let's discuss…..

Who was Erik Erikson?

Erik Erikson (1902-1994), a Danish-German-American psychoanalyst and developmental psychologist, is best known for his theories on the psychological development of human beings.  Erikson is credited with coining the phrase "Identity Crisis."  Erikson became interested in studying psychoanalysis after meeting Anna Freud, daughter of Sigmund Freud. Erikson, who never earned a college degree, studied at the Vienna Psychoanalytic Institute through the Montessori method. He taught at both Yale and Harvard. He retired from Harvard in 1970.

Erikson is one of the pioneers of ego psychology which emphasized the crucial role the environment plays in the security, intellectual and social development of children.

The Eight Stages of Psychosocial Development are grouped by an age range with a corresponding developmental psychosocial crisis and virtue. Successful resolution of the crisis, at each stage, develops a virtue that contributes to a positive outcome for personality development.  In contrast, an unsuccessful resolution of the crisis may result in a negative outcome for personality development.

The eight stages are like steps in the personality development life cycle that flow in a sequential order. Each step has a specific need to be fulfilled. The steps build on each other and occur unconsciously. What happens when a person ages out of a stage but does not resolve the corresponding psychosocial crisis and learns the virtue? According to Erikson's theory, the person's personality suffers which interferes with the social quality of life of the individual.

Erikson was a colleague of Sigmund Freud, but they developed different theories. Sigmund Freud focused mainly on the parent-child relationship, whereas Erikson focused on the role of the parent-child relationship, as well as the extended family, neighborhood and community.  Freud would ask, "What kind of relationship did you have with your mother and/or father."  Erikson would ask, "What type of environment did you grow up in?"

What is important to remember when studying any theory is that these are ideas based on the author's research and observation, but it may not be 100% truthful in every situations.  Erik Erikson has many critics who say his theories are too broad, too narrow, or misses important steps. However, a benefit in studying this theory is it gives you an outlook on human behavior and can aid in your understanding of why we, and others, behave the way we do in certain situations.  It is food for thought, which can nourish your understanding of society and your relationships. Like any all you can eat buffet, take what feeds you and leave the rest on the table.

Each stage of psychosocial development: 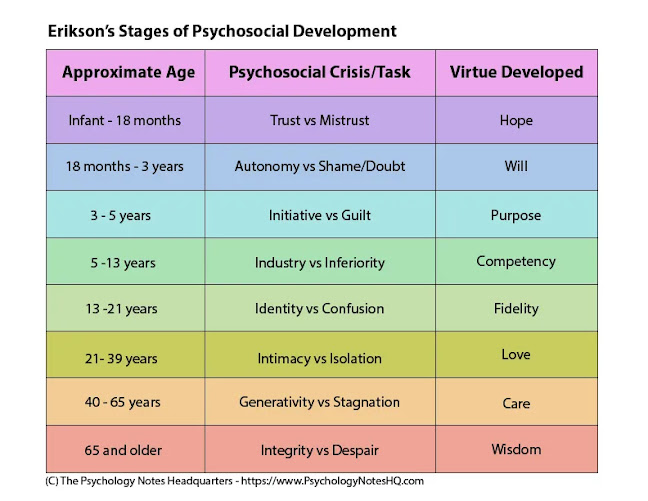 Stage 1: Age 0-18 months. Trust vs Mistrust
Relationship: Mother
Virtue: Hope
Summary: Is the foundation that all of the other stages are built from.  The baby is primarily dependent on the mother for a sense of safety. If his/her basic needs are met consistently, then the child develops trust. However, if the needs are not met at all or is inconsistent, then the child develops mistrust.
Questions to ask/consider:  Are the baby's needs met consistently? Does the baby get enough attention? Is the baby held and cuddled? Does the baby feel safe? Is the baby encouraged to move around and explore their environment freely, but with supervision?
Stage 2: Age 18 months- three years. Autonomy vs Shame/Doubt.
Relationship: Parents
Virtue: Will
Summary: Begins to explore and perform small tasks independently to develop autonomy.  The child learns how to walk and run. A healthy environment encourages children to try new things and learn what they like and are good at to build confidence and self-esteem.  "The terrible twos" is when the child starts to assert themselves. This is the age of toilet training.
Questions to ask/consider:  When the child makes a mistake are they reprimanded and/or yelled at harshly?  Are children able to express themselves freely, within reason? Is the child given an opportunity to do small tasks independently? Is discipline consistent?
Stage 3: Age 3-5 years. Initiative vs Guilt.
Virtue: Purpose
Relationship: Family
Summary:  Environment expands to include school, unless homeschooled.  The child is encouraged to make choices about their likes and dislikes, such as a favorite shirt or food, which develops initiative.  Play is important as well as fundamental learning skills such as reading and mathematics. Hands on activities where children can choose what to do at playtime, under supervision, also develops initiative. Guilt may result if children are not allowed to make simple choices, most choices are made for them, they are overly scorned for making a 'wrong' choice, or are harshly reprimanded for making non-life-threatening mistakes.
Questions to ask/consider: Is the child allowed to pick what toys to play with at recess? Are children allowed to show initiative in deciding small tasks like what to wear or what activity to do during freetime?  Do the children have social activities such as dance or sports? Are the children allowed to express their creativity?
Stage 4: Age 5-13. Industry vs Inferiority.
Virtue: Competency
Relationship: Neighbors, school
Summary:  The age of comparison. Onset of puberty.  Children notice differences between themselves and other children. Instead of children playing with anyone at the playground, they now seek out their special friends. This is the age where talents such as dancing, singing, music or sports are cultivated. It is important for the child to have hobbies or extra-curricular activities to develop a sense of industry.  If not, then the child may feel inferior to their peers.
Questions to ask/consider: Do my children have friends?  Who are my children's friends? What type of extracurricular activities do my children participate in?  Do we talk about biology?
End of Part One:
To be continued....thank you.